Fungi are properly, full on fascinating to middle aged me.  I’ve been aware of them all of my life but I can honestly say I spared them little attention most of that time.  I would occasionally notice something interesting but mostly fungi were “icky” or “poisonous” according to my inner < 10 year old. Memories conjure up slimey, black, mostly rotted things, puffballs and mushrooms.  My family are dedicated field mushroom hunters and eaters, but largely the wisdom of my youth was that fungi were tricky to identify and frequently deadly, so if not a puffball (fun to play with but taste like medicine) or an actual mushroom leave them all alone.  I’ve noticed that my ES gets quite anxious that I don’t touch the fungi I’ve become so fascinated with when out walking, so I must have passed on the “yeah these guys can kill you in ‘new inventions of hell’ ways” message. Reading recently that certain varieties cause liver and kidney damage that will kill you, without hope of a cure, over 5 or 6 days in truly terrible fashion I find that my inclination to try out new fungi to eat is not noticeably increased.

I’ve noticed and recognised some varieties over the years without ever previously knowing how awesome some of the names of them are.  I think my favourite name so far alternates between the Amethyst Deceiver and Dryad’s Saddles, but there are Bloody Brittlegills, Inkcaps, Dune Brittlestems, grass osterlings, Porecaps, Turkey tails and Scarlet and Ruby Elfcups amoungst so many others that just make me peculiarly happy.  I’ve never been a fan of the fact that most place names pretty much boil down to “Beside the River”, “Big Rock” or “Well” or “So and So’s Church”, so I appreciate the extra effort that’s gone into fungus names generally.  To be honest I strongly suspect that finding out that a particularly curious little guy in a glorious shade of red was called a Scarlet Elfcup was the start of me paying proper attention.  These would be them:

I think, even allowing for my new found, all absorbing interest, that 2018 was a particularly good year for fungi.  This year I’ve seen proper full circles, I’ve seen an astonishing range of colour and some properly impressive brackets.   There has been a distinct lack of slimey, rotting black.  2018’s summer was astonishingly hot in Ireland, the autumn for the most part extremely pleasant and quite dry and the winter so far has been mild, I think I could count the truly cold nights on one hand.

But back to why I started with the exercise in caution.  I am not good at this stuff, I am learning as I go and I am not at all sure I will correctly identify any single fungus I post a picture of (pretty sure about the elfcups, mind).  I will certainly try and I will write up why I think it is what I think.  But I am not, even for a second, suggesting anyone take my word for it.   When I started taking pictures I didn’t know what to look for, like the gills, their colour, how far they go from stem to edge, if there are actually any gills in the first place, the cap shape and so on.  I’ll be making a post about my new “spotter’s notebook” layout for myself, which will talk about what kind of things you’ll need to record if you want to try identifying anything later.    My first important lesson? Take a photo of the top, side view and underside of anything, pay attention to what sort of area you found it in and what sort of trees, timber, leaf litter and so on is nearby or underneath.  Definitely take note of the thickness and shape of the stem, any useful identifying rings or ridges.  I’ve been caught a few times with a cap that was similar to many things and lots of useful advice about how to tell from gill or stem what it might be, but no way to go find out in hindsight.

Lets just use these as an example: 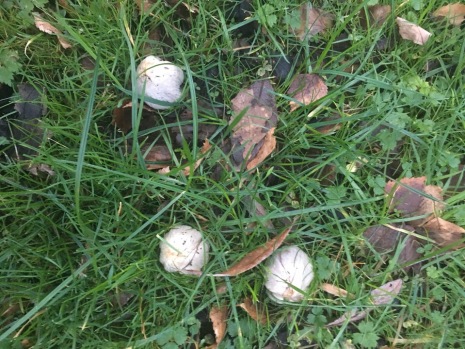 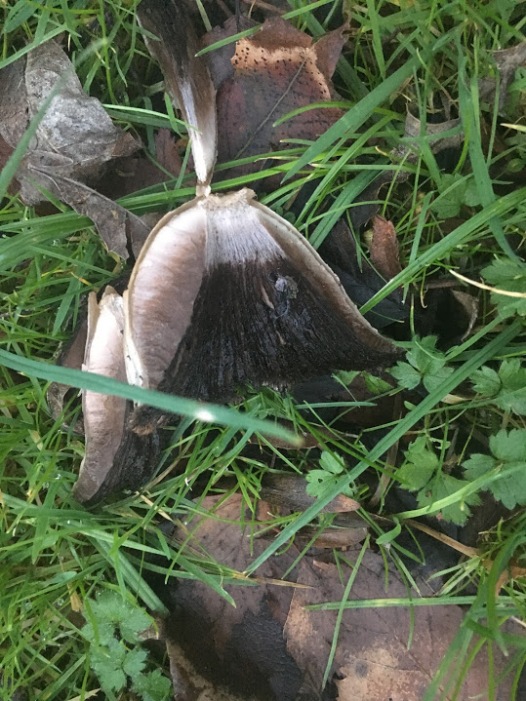 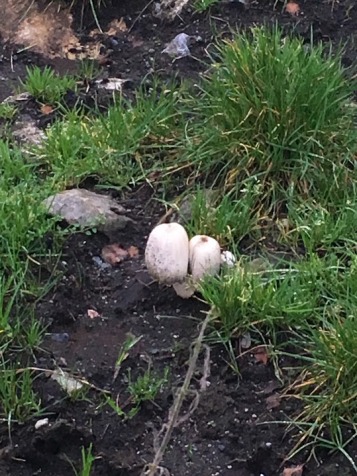 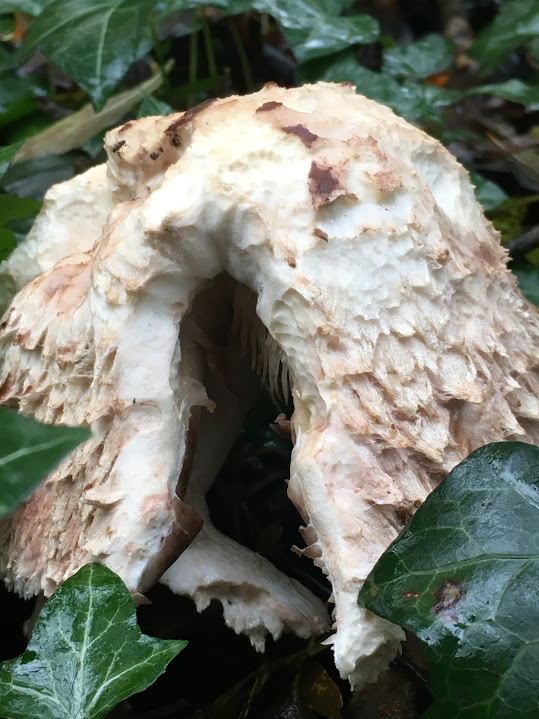 The first 4 photographs were taken yesterday in Maynooth University on open grass.  The flat capped one was close to the ovate shaped ones. Are they different or the same fungus at different stages?  The fifth photo was taken in Offaly a few days ago, and I couldn’t actually get closer to them but they were growing in a field (open grass)  The last photo was also taken in Offaly but a couple of months ago.  Can you tell from the photos if these ovate ones are the same or different?   These photos are also completely not reliable as reference materials, they’re too difficult to make anything out. Are there ridges on the first one?   I see gills and I can tell greyish to black, but how were they in relation to the stem? can I really tell?  My initial research suggests that they *might* be Inkcaps.  But Inkcaps season is listed as ending in November.  The winter is so mild?  What kind of Inkcaps?  The top ones look smoother than the bottom ones.  Maybe they’re common inkcaps?  Does it matter? Well yes, because while I see that Shaggy Inkcaps are listed as edible, and even good to eat,  Common Inkcaps are poisonous when consumed with any alcohol or even having consumed alcohol a couple of days before or after eating them.  Inkcaps deteriorate rapidly distributing their spores, they turn into – you guessed it – a slimy black gloop.  Is that “flat” fungus a previously ovate one where the edges have been dissolved back to that state?   So yes, based on what I know at the moment, I don’t know what these are.  I need *much* better field notes and photos.  But I have a clearer idea what I do need to pay attention to.

Interesting side note.  I make ink in my other life. If these *are* Inkcaps I could take the black gloop and try an old recipe that called for that heated up with some water and cloves.

If you wish please feel free to share this:

This site uses Akismet to reduce spam. Learn how your comment data is processed.